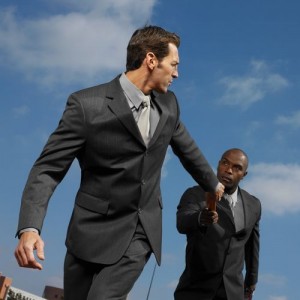 Both Superman and Batman are known for their epic battles on comic book pages. The battle over the estate of the widow of one of the co-founders of DC Comics, which publishes the comics, is shaping up to be just as epic.

Shirley Liebowitz, the late widow of Jack Liebowitz, may have been a very demanding person. When she passed away at the age of 96, it was discovered that she had directed that 28 different wills be drafted over the years to dictate how her nearly $50 million estate should be distributed.

In recent court filings, her son is alleging that his share of the estate gradually lessened with each successive will.

The son is blaming Liebowitz’s business manager and her lawyer who drafted the wills. The son claims they unduly influenced the widow to give themselves large shares of the estate.

The business manager and lawyer deny the son’s allegations.

DNAinfohas the full story in “Widow of DC Comics Co-Founder Was Conned By Workers, Son Says.”

The big issue here is that you should never leave a large portion of your estate to the person who drafts your will, without taking extra precautions. Period.

If someone else is upset with the terms of the will, a charge of undue influence against the drafter is inevitable. For that reason, it is vital to have a third-party attorney draft the will or at least offer advice about the will’s terms.

At this stage it is impossible to know how this case will go. It will undoubtedly be a long time before Liebowitz’s estate is finally settled.